A while ago I asked people on twitter, how do they test that what's intended to be run == what's actually running ? Kubernetes appeared in replies instantly, but we will talk about a level beyond.

Imagine we have several network interfaces connected to a Linux server. One of them will become the default gateway for network packets. In order to redirect traffic to a specific destination (say 1.1.1.1) via network interface connected to another gateway (say 192.168.56.1) we have to do something like that:

Routing tables belong to kernel stuff and they are exposed by iproute package. Now you can run ip route get 1.1.1.1 and get this reporting everything is ok:

At this point a small lyrical digression here. Unix has got it right: small programs which do only one job (but they must do it well) should be just connected together via pipes to get everything you want. And iproute does its job - managing routing tables - well. The only thing at which it's bad is outputting its state. Unless you're using regular expressions upon its output (but then you'll have 2 problems, you know).

So basically you could compose a shell and run it against all your boxes. But maybe you've heard about dda-serverspec and in the new release you can do the same leveraging all the power of the library (execution against multiple servers in parallel, batching several commands and others matchers) in a very declarative and concise way. 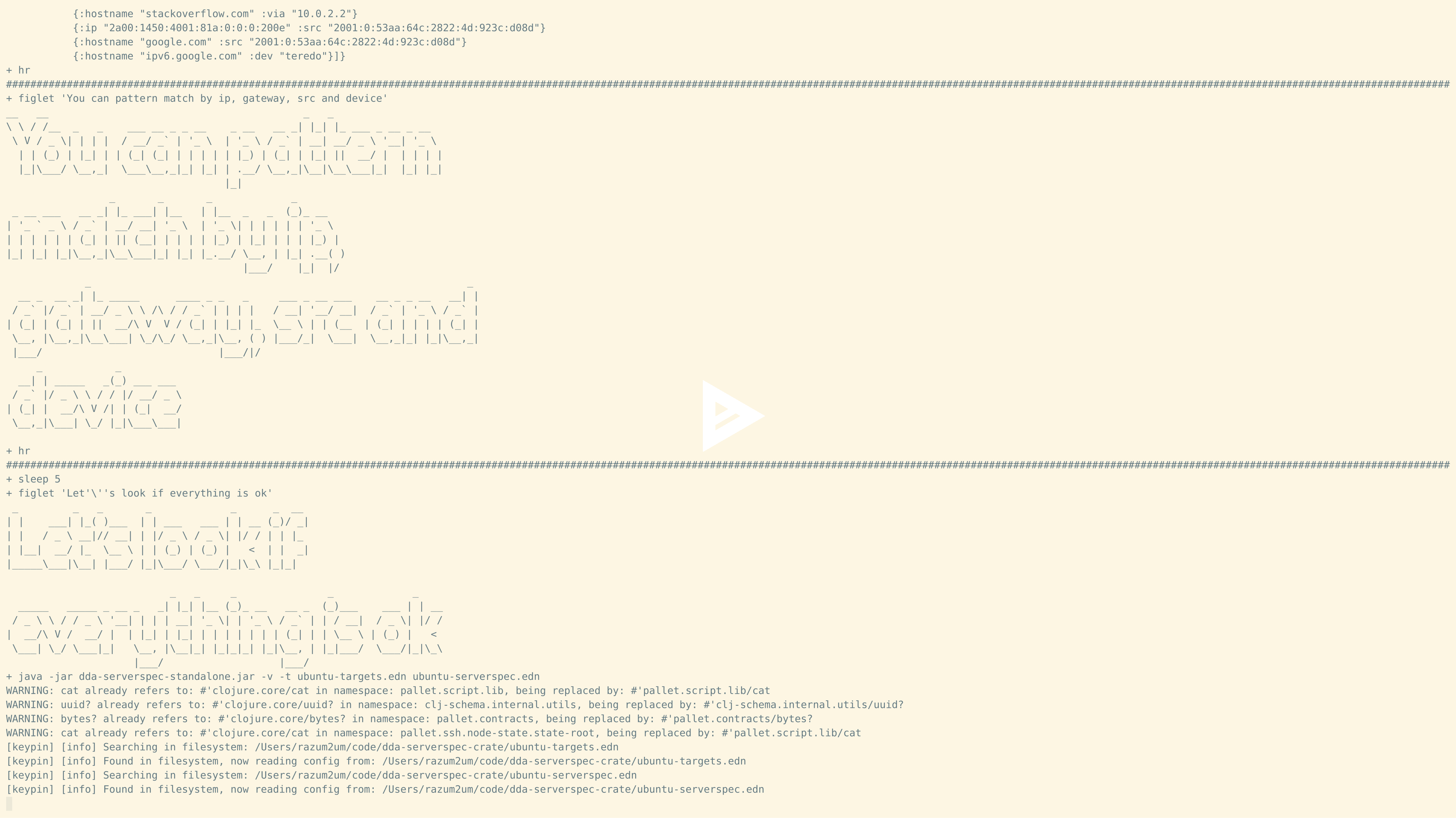 Now let's do this step by step:

Go to the latest GitHub release and download dda-serverspec-standalone.jar

You may already suspect, we need to point to the running servers, which we want to test. This is ubuntu-targets.edn contents, which you can use for almost any other tools in DomainDrivenArchitecture.

As you can see values are essential parts of iproute output. You can specify various combinations for both ipv4 and ipv6 like:

Hostnames will be expanded to several ip tests and they will issue several iproute get commands in batch, parse results and pattern match expectations.

Spawn Probe and execute the Test

In result either all tests passed, or you'll see yours expectation and found facts highlighted if they don't match:

Another small lyrical digression. Rich Hickey got it right: a database can (and probably should) be treated as a value at some point in time inside of your program. Why cannot we treat a remote server like that? Right now in kubernetes, this state is living encapsulated inside a golang process and it exposes endpoints like OOP is exposing public methods of some objects. Nice, but why cannot we do functional approach to this by decoupling state from the behavior?

A couple of years ago Facebook introduced (and still supports) a tool, which exposes the current system in SQL: osquery. But why restrict yourself to the tables? Why the binary should be copied over the target machines and executed there if we could do fire remote commands via ssh in parallel against different servers? Star dda-serverspec if you like this idea. This most recent support of iproute in the library is just a small step towards the tested data-oriented future of infrastructure management.